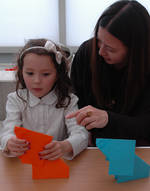 Family Studio: Out of Space

Build your own stellar mobile and see it glow in our UV workshop.

Free; no booking required. Upon arrival, signage will direct you to the Learning Studio.

Supported by Jeanne and William Callanan.

Here is some info about the MARIKO MORI exhibition :

This winter we welcome New York based Japanese artist Mariko Mori to our new space for art and architecture in Burlington Gardens. Her first major exhibition in London for 14 years, Rebirth includes some of Mori’s most acclaimed works from the last 11 years, alongside new works created especially for this exhibition. Starting and ending with the death and birth of a star, the cycle of life and rebirth is an important theme of the show, which includes photography, works on paper, sound works, as well as sculpture and large scale immersive installations and environments that invite contemplation.

The exhibition has been developed in close collaboration with the artist, and is timed to coincide with the winter solstice in 2012. According to ancient calendars, this year’s solstice will either mark the end of the world or the birth of a new era.

Since her first exhibitions in the mid-1990s, Mori’s practice has been rooted in both traditional and contemporary Japanese culture, and between East and West. Her works juxtapose contrasting aesthetic languages that have ranged from traditional tea ceremonies to Manga and cyber culture, fusing Shintoism and Buddhism with the hard planes of science and technology. Mori’s recent practice has evolved around a fascination with ancient cultures, among them prehistoric Jomon (c.14,000 – 300 BC) in Japan and Celtic traditions in Europe. Founded on a belief in cycles of death and rebirth, these were marked by a holistic world view that placed mankind in a more harmonious relationship with our surroundings. These interests are expressed through emerging technologies and digital media, which the artist embraces as tools to be harnessed in order to reconnect with our environment.

The Japanese artist Mariko Mori is re-imagining ancient myths, using state-of-the-art technology to create mesmerising sculptures and installations. Rachel Campbell-Johnston spoke to her as she prepared for her show at the RA’s Burlington Gardens space.

Mariko Mori at the fabrication studio in New York where work for her RA show is being cast, 2012. Photo © Graham Macindoe

When Mariko Mori first emerged on the art scene she was hailed as the ultimate cyber star. Born in Tokyo in 1967, this former fashion model, who moved to London to study at Chelsea College of Art at the end of the 1980s, made her name as one of the best-known Japanese artists of this era by taking the starring role in her own multi-media shows. Dressed as a cyborg, a mermaid, an out-of-this-world alien, she stalked hi-tech dreamscapes, computer-game stores and subway carriages in photographs and video pieces that asked their viewers to ponder such themes as the construction of identity or the role which technology can play in the development of the human race.

But by the late 1990s she was moving into more nebulous territories. ‘It wasn’t that I didn’t want to use my body anymore,’ says Mori, ‘it was that I was becoming interested in something more inner.’ Buddhist and Shinto beliefs are part of her cultural background, she explains, and at that time she felt the lure of the deep consciousness which is a key to explaining the mechanism of reincarnation in Buddhist philosophy.

In 1999, melding traditional Buddhist iconography with futuristic technology, she created Dream Temple, shown at the Royal Academy’s ‘Apocalypse’ exhibition the following year. Visitors were invited to climb, one at a time, into a glass ‘vision dome’ and, kneeling at the centre, to stare entranced at the unspooling computer-generated patterns that flowed all about them. Art and technology were brought together in a visual – and visceral – experience intended to awaken a sense of some universal spiritual consciousness.

It is this universality that Mori has explored ever since. And now in ‘Rebirth’, her exhibition in the RA’s Burlington Gardens space, she displays works produced in the past decade – including some completely new works – through which she sets out to evoke her ever deepening fascination with the integration of all things, of the flowing movement that draws all creation into its eternal continuum.

It can all get pretty complex. But basically, Mori explains, this exhibition arose out of her research into prehistoric cultures. ‘I was looking for a universal language that we could all relate to,’ she says, ‘something that our remote ancestors, who lived in a time when there were no borders or nations, who all shared a common faith, would have known. It is relevant now to rediscover the relationship between man and nature from our primal history and fundamental culture. I would like to encourage us to reconnect with nature.’

Mariko Mori, ‘Tom Na H-Iu’, 2006. Glass, stainless steel, LED, real time control system, 427 x 156.3 x 74.23 cm. Mariko Mori Studio Inc. © Mariko Mori. Photo: Richard Learoyd‘Rebirth’ is timed to coincide with the winter solstice, she says, which this year, according to certain ancient calendars, will either mark the end of our world or the birth of a new era. ‘The exhibition will take the form of a journey,’ says Mori. It will begin with a great glass monolith – ‘like a Celtic standing stone’ – called Tom Na H-iu II (2006), named after a mythical Celtic realm where the souls of the dead linger for a hundred years, awaiting their eventual rebirth. To guide the returning souls back to Earth, the ancient Celts created special monuments and stelae that were intended as places for spiritual transmigration. Mori’s monolith will glow with vaporous pinks and otherworldly yellows, ghostly greens and pastel blues. The colours are constantly changing because the LED lights within them are linked via the internet to a computer at the Kamioka Observatory in Japan, an underground cosmic ray research station which monitors the primal, low-energy electronic particles known as neutrinos that are emitted in vast quantities during the explosive death of a star. The changing light patterns in Mori’s monolith will respond directly to their presence. And since these neutrinos are essential to life, coalescing once again to become a part of anything from new stars to the earth and the water of our planet to our own bodies, our freshly heightened awareness of them will also alert us to the fact that, as Mori puts it, ‘we are part of a whole, part of the life cycle of the entire universe.’

‘This show is primarily about connectedness,’ she explains. It finds its roots in the Buddhist idea that our lives are linked together like the string that holds beads. The exhibition will lead its viewers past drawings that Mori made in front of the ocean and which respond to her sense of the sea’s eternal rhythms. It continues past computer-generated images of strange fragile bubbles and ethereal hazy glows that capture her vision of a deeper consciousness. It concludes with a giddying installation, White Hole (2008-10) which, bringing the viewer full circle, speaks of the rebirth of a star.

‘We live in an age that has detached itself from spiritual feelings,’ Mori says. ‘We have abandoned our knowledge of the importance of nature.’ But instead of returning to a lost primitive age, she uses state-of-the-art technology to try to rebuild our relationship with our environment. ‘I want to show how technology can be used to make a better world,’ she says, ‘how it can share a vision of spirituality.’

So is space travel the next stop? ‘No,’ she laughs, ‘though I think it would be good if you could see Earth from outer space and feel that you belong to this planet and not to a specific country. Considering the world’s current situation, it is essential. I want to develop this Earth consciousness.’

This delicate woman with a mannequin’s slip of a figure and unsullied face to match becomes a model for our lives in an increasingly complex technological future. She is on a mission to do nothing less than save the world.