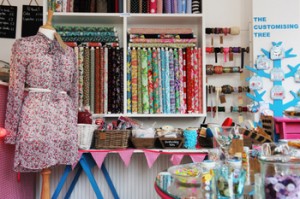 If you live South of the River, and can negotiate the traffic or public transport, you could take your budding young sewers along to the Tuesday after school sewing club at SEW OVER IT. Here is a little info to tempt you.

Lisa Comfort – owner
I fell in love with sewing aged 11 when I made my first skirt. A year later my parents gave me a sewing machine and I have never looked back since. Despite being teased for my “uncool” hobby, I persevered and carried on sewing. After studying at the London College of Fashion I worked for British designer Bruce Oldfield and then bridal couture designer Phillipa Lepley. I set up Sew Over It in a response to the growing feeling that sewing was becoming a lost skill. I hope that I can pass on my passion for sewing through Sew Over It and encourage more people in London to pick up a needle and thread!

Since opening Lisa has published her first book, Sew It, Wear It, Love It – an intro to sewing for beginners. She has also appeared on the Alan Titchmarsh Show and Kirstie’s Vintage Home. And finally, she was shortlisted in Red’s Hot Women Awards in the Woman to Watch category.

Learn how to sew and make some great little projects. Using brightly coloured felts, fabrics, ribbons and buttons, children will enjoy both the process and the outcome of the projects.

The course is 6 weeks (half a term) long. Each project lasts around 2 weeks depending on the group. They could be making: keyrings, badges, masks, little monsters, bunting, pencil cases and felt paperclips.

All the fabrics and materials are included. The projects are all hand sewing, future terms could include some hand sewing. Payment for the 6 weeks must be made in advance to book a place. Maximum of 8 children in the group (as sewing needs lots of teacher attention!)