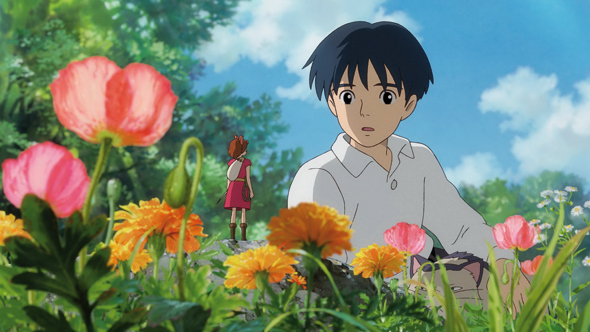 In homage to the cultural landmark that is the British Film Institute on the Southbank, we are joining them celebrating the brilliant work of Japanese Director : Hayao Miyazaki (know to many as Japans’ Walt Disney).

Our girls are big fans, and really attached to the characters in Studio Ghibli films (My Neighbour Totoro above being the main one) and he has a special place in our family. They have grown up with the the films Totoro, Ponyo and Spirited Away, and are totally drawn to the charming story-telling, enchanting hand drawn digital animation and beautiful music.

Studio Ghibli is know for adapting popular books aimed at younger audiences, sometimes focusing on adult relationships or situations. Hayao created Studio Ghibli the Japanese animation company in 1985, this year the legend himself is stepping down from the company to enjoy retirement (he is 84 years young), and has produced his final film The Wind Rises, which is written for an older audience (released on May 9th).

If you haven’t yet joined the Ghibli fan club, give one of the movies a try this May at the BFI. There are even a couple of workshops for the 8+ crowd during 1/2 term at the BFI, which will be booked up pretty quickly. Check the events diary on the home page for the details/ dates.

Here are some Wiki facts about Studio Ghibli for your next pub quiz: