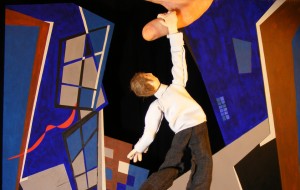 Starting on Tuesday 12th March, and running until the end of the month of March, the Little Angel Theatre is celebrating puppetry and are working with emerging companies, selling tickets for all the shows below for £5 only.

The shows you can see are for the teens and little tinkers alike. The first being the Sparkle and Dark’s Travelling Players ‘Killing Roger’. Take a look at the website to read more about the new companies, and the productions themselves. All good stuff, for anyone that likes, loves or even just fancies supporting the next generation of puppetry artists, and the wonderful establishment that is Islington’s Little Angel Theatre.

Showing: Tuesday 12 & Wednesday 13 March, 8pm
“Could you kill someone Billy? I mean really, could you?…What if they asked you to?” Billy, a conscientious,…

Showing: Fri 15 March 5pm & Saturday 16 March 11am
When all is quiet on the farm, when everyone is asleep, when the snow covers the ground and stars twinkle in the frosty…

Showing: Sunday 17 March & Monday 18 March, 8pm
A hilarious tale of a man who misplaces his nose and embarks upon an absurd journey to reclaim the errant snout, and…